Next in MotoGP ’09, Portugal: Estoril Circuit 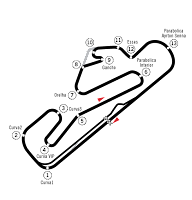 MotoGP ‘09 world championship will head to Round #14; Estoril Circuit in Portugal after a four weeks time. After a successful weekend at Misano, the MotoGP reigning world champion, Valentino Rossi, will be confident and will look forward to consolidate his 30 points advantage over his team-mate and rival Jorge Lorenzo, in the general standings. Lorenzo will look to obviously finish the race with the top result.

Meanwhile, Casey Stoner is likely to return after being on sick leave for the last three races. Dani Pedrosa will be hoping to extend his lead over 4th placed Stoner, on his Honda ride. Also, there has been a confirmation that Pedrosa and his current teammate, Dovizioso, will stay with Honda for the 2010 campaign. It would be an exciting weekend, and I look forward to it.