#SepangClash Evidence of no “kick” involved between Rossi & Marquez

Since, Thursday’s Press conference, I have been super worried about what might happen on Sunday come race. I watched every session on MotoGP.com, and even slept less to catch events in time. I was very happy when Rossi knocked off Lorenzo off the front-row in qualifying on Saturday, and was hoping for a good race for Vale on Sunday. 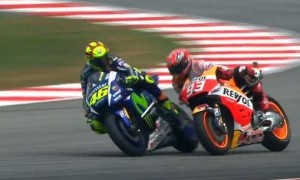 In the race, unfortunately, Rossi found himself yet again scrapping with Marquez in front, who was, as mentioned by Race Direction, deliberately disrupting Valentino’s race without breaking any rule. To me, that is okay, but if he really wanted to catch Lorenzo, he could have just sit behind Valentino and catch him together, whereas Marquez made harsh passes on him every other turn, and slowed him down – that is my opinion.

Out of frustration, Rossi ran him wide on Turn-14, and they made contact, and Marquez fell. Race ended with Pedrosa winning with Lorenzo second and Rossi in third.

Commentators (especially on BTSports) were of the opinion that Rossi had kicked Marquez causing him to crash, and were already taking about Race Direction handing harshest penalty to Rossi. I could not digest that Valentino could do such a thing, and was also upset of what commentators and hosts in the pit lane were saying.

What amazed me is that I could not decide for myself on whether “Rossi kicked Marquez’s bike” and caused him to crash even after watching the replays numerous time or not, whereas Lorenzo in press conference was accusing Rossi for the same when he had only watched it once!

I’ve been very disturbed since this morning, and I’ve been reviewing clips, reading articles on forums, fan comments and statements from the riders on MotoGP.com, Crash.net, MCN, and on twitter pages all day.

I’m a Rossi fan, and I have been very happy to see Rossi leading the championship from the first race. He has put his heart out on the race track, and I really want him to win that elusive tenth world title like his all other fans do. #ForzaVale.

After Race Direction review, Rossi had been handed 3 points on his driving license, making it a 4 in total, meaning he would start #ValenciaGP from the back of the grid, and that has me worried, as championship could be lost.

After a lot of effort, I’ve found at least a few credible comments/posts that show evidence that there was no KICK involved rather it was Marquez who made the first contact with Rossi’s leg, and his foot came off as a result of that contact. Please see some tweets/comments below, and an animated GIF.

The one thing that is clear from multiple angles is that there was no kick. VR’s foot comes off rest AFTER contact.

This has given me some confidence that what Rossi says is true. He did intentionally ran Marquez wide to slow him down and disrupt his line, but he DID NOT KICK HIM.

Valentino’s and Marquez’s statements after the race have different versions, but I find Rossi’s to be truer of the two. I’m in no way defending Rossi intentionally running Marquez wide, just that he didn’t kick him like many are claiming and that he didn’t want him to crash.