A long awaited MotoGP documentary film: Hitting the Apex, narrated by Brad Pitt got released last month in September, 2015. It follows MotoGP season 2013 closely; and the riders in contention of lifting the title. When I grabbed the DVD, I only got time after mid-night, but I had to watch it, so with a run-time of a little over 2 hours, I watched it around 2am one night. 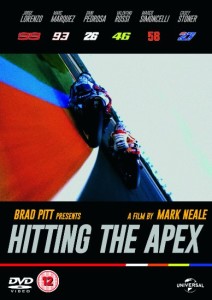 The plot of the movie is as follows:

‘Hitting the Apex’ is the inside story of six fighters – six of the fastest motorcycle racers of all time – and of the fates that awaited them at the peak of the sport. It’s the story of what is at stake for all of them: all that can be won, and all that can be lost, when you go chasing glory at over two hundred miles an hour – on a motorcycle.

I’ve already watched the previous three movies; Faster, The Doctor – The Tornado – and The Kentucky Kid, and the Fastest, and those were just awesome. The narrators have done a fantastic job in storytelling, and the latest movie is narrated by Brad Pitt, a famous Hollywood Actor.

The six of the fastest motorcycle racers of all time referred in the movie are: Valentino Rossi, Jorge Lorenzo, Dani Pedrosa, Marco Simoncelli, Marc Marquez, and Casey Stoner. It also includes archive footage from their childhood and early racing days. The background music is just awesome. I’ve watched it 5 times now, and didn’t get bored at all, it’s just that good.

If you are a MotoGP / motorsports fan, this is a must see movie. I got my DVD from DVD Planet Store Pakistan at PKR 150/-. They have the previous MotoGP documentary films as well.

You may want to vote on the following poll: