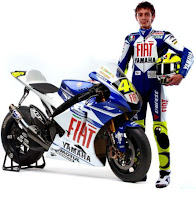 Round 13 of MotoGP ’09 started on Sunday, with Valentino Rossi, the Reigning World Champion, the standing leader, and last year’s Misano race winner, on pole position. Rossi didn’t get an ideal start and was down to 4th by the end of first couple of laps. Then he found his rhythm and passed Jorge Lorenzo, then Toni, and finally Dani Pedrosa for the lead. After that he never looked back and finally finished ahead of his team-mate Lorenzo by nearly two and a half second. It was Rossi’s 6th win of the season, and now holds a 30 points lead at the top over his team-mate.

I am so glad that he won the race overcoming his mistake from the last GP race at IndianaPolis. Now, there is a four week break, and then MotoGP would move to the 14th Round that is Estroil Circuit, where Rossi also won last year. So, hopefully Rossi repeats his triumph there again this year.
Other news is that Casey Stoner will also return after being away for three races, recovering from illness. He’s currently fourth in the general standings, seven points behind Honda rival, Dani Pedrosa. So, he will be up for the quest.
For more information, visit www.motogp.com