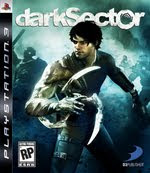 Dark Sector intended to take place in a science-fiction environment, notably in outer space.
Players take the role of a character that inhabits a sleek mechanical suit with incredible powers.

The game’s main character is a man named Hayden Tenno, a morally ambivalent clean-up man employed by the CIA. He suffers from a real-life disease called congenital analgia that does not allow him to feel pain (that’s interesting!!! ).

On a mission in a fictional former eastern bloc nation, he is exposed to a biological compound which mutates him, dramatically changing his right arm, and giving him the ability to spontaneously grow a three-bladed throwable weapon called a glaive. The glaive is a part of his body, can be used to generate light, and can be controlled remotely by the player.

During the course of the game, Hayden encounters others that have been similarly mutated by the compound. However, the mutation process is painful to the point that its victims go mad. Hayden’s congenital analgia inadvertently protects him from this aspect of the mutation.

Dark Sector is slated to be released in early 2008. Set in the crumbling infrastructure of a fictional Soviet-bloc country in the near future, the game features both single and multi-player action, with players working their way through a world where biological weapons are a hellish nightmare, let loose on an unsuspecting populace.

I’ve been playing Resident Evil 4 and Soul Reaver, which are also role-playing games and both of them are really good. Usually, it will take you atleast a month to finish such games and if you get stuck somewhere you might get rid of the game but that is where the fun begins. Not all gamerz like such games but for the players who do, should surely try this one!