New Zealand vs. Australia, the final

New Zealand takes on Australia, in the final

The final of the ICC Champions trophy will be played between the teams of New Zealand and Australia. The match will begin at 12:30 GMT time, at Centurion, today, on October 5. 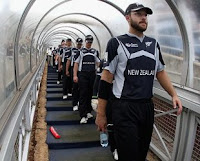 So far, New Zealand team has been hit with injuries from the very start of their campaign, but they have performed well in crucial games, and have taken a place in the final by beating better sides, like in the semi-final, where they beat Pakistan by five wickets.

New Zealand team loses Jacob Oram, the hard-hitting middle order batsmen, and a medium pace bowler, before their campaign starts. Jesse Ryder, the opener, pulls his left abductor muscle during the Sri Lanka game, but before leaving plays the kind of innings that must have led to the coining of the phrase “beware the wounded batsman”. Afterwards, Daryl Tuffey, at the time looking their best bowler, breaks his hand while fielding and is ruled out for the rest of the tournament. Next up, Grant Elliott, hero of the win against England, breaks his thumb, but braves the injury to score a heroic unbeaten 75 in the semi-final against Pakistan, where on paper; Pakistani team had the upper hand.

On the other hand, Australia qualified for the final by beaten England comprehensively by nine wickets. Two of their batsmen scored a ton, namely; Ricky Ponting (the captain), and the dangerous Shane Watson. New Zealand may be the underdogs in this encounter too, but if they find a way to get these two batsmen out, it might be another upset of the tournament.