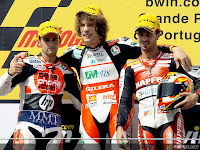 Marco Simoncelli bounced back with Estoril triumph after a disappointing race at his home track, four weeks back in Misano, where he crashes out from second position. It was his fourth win in six races, while Alvaro Bautista crashes out of the race.

However, Hiroshi Aoyama doubled his title advantage over Bautista to 26 points, he was not happy with his performance, as he thought he could do better, and that he did not want Simoncelli to win. Now Simoncelli is just 28 points behind him, and 2 points behind Bautista, with 3 races to go.

Bautista led the race for a few laps but was overtaken by Simoncelli, and on a turn, he went wide, and lost a few places down to fifth place. While he was trying to push very hard to make up some places, he crashed out of his own mistake, and his title chances might have ended with it.

On the other hand, Simoncelli is in a good form and some may still believe that he might just be able to defend his 250cc championship title.