Lorenzo gains title hopes with this fourth win at Estoril 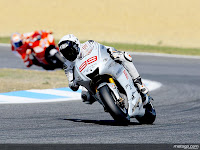 The MotoGP race showdown began at 13:00 local time, with Lorenzo on pole, with Rossi and Casey joining him at the front row in second and third on the grid, respectively. While Dani Pedrosa started from fourth on the grid.

At the start, Dani Pedrosa took the hole-shot and led the race for some time in the first lap but eventually was overtaken by Lorenzo. Lorenzo then never looked back, and had already created a gap of around 1.5s by the end of lap 3. Rossi didn’t get a good start and was down to fourth at the beginning, but was eventually overtaken by Casey, who looked really good, and had a great race pace. Casey moved in second, overtaking Dani, which put him just ahead of Rossi.

Lorenzo was opening a gap by one tenth of a second each lap, as Stoner was pulling nearly three tenths on the start-finish straight. However, lap-by-lap Casey Stoner lap times got slower that increased Lorenzo chances of winning the race, and he eventually won by 6.3s ahead of Casey.

Rossi, the King of Estoril, who has been on the podium in all nine appearances, with five wins, did not look to challenge for the podium. He finished off the podium, in fourth place for first time in his premiere class career at Estoril. Later, he told that he had a problem with the rear grip, and he spotted that in the early stages of the race. However, he was of the view that they had to resolve this issue before the next race, on 18th of October, at Phillip Island.

Lorenzo has now gained his title hopes with his fourth triumph in the season, as he cuts down Rossi’s championship lead to 18 points, with three races to go.

Well, the lead is not much, but Rossi is still leading the championship and that is important for him. If everything goes fine, he will be able to keep Lorenzo at a distance in the next three races. I hope Rossi wins the championship.